You are here: Home1 / Media & Policy2 / Our Campaigns3 / 10 Solutions for Smarter Futures

One Family calls on Government to deliver on 10 Solutions for Smarter Futures. Here’s why.

Budget 2012 penalised lone parents and added to their struggle while current legislature creates numerous pitfalls for lone parents returning to work and education. Against a background of inaccurate and judgemental media stories, which too often demonise lone parents availing of social welfare payments, the system increasingly focuses on blaming individuals for being out of work. Meanwhile, the real barriers to employment such as lack of childcare, employer discrimination, below poverty level wages and the lack of jobs are not being tackled effectively. Many lone parents are required to engage in work seeking activities, education and training despite inadequate, inaccessible and unaffordable childcare provision. This has resulted in an expensive to administer system so complex that people often don’t even know what they are entitled to and are frequently plunged into crisis every time their circumstances are altered. Now it is time to make some fundamental no nonsense changes.

Ten no-cost/low-cost no nonsense measures designed to facilitate lone parents as they move into the workplace, education and/or training.

One Family believes in an Ireland where every family is cherished equally, and enjoys the social, financial and legal equality to create their own positive future. The fact that in a rich country like Ireland there are lone parents who struggle to feed and clothe themselves and their children and pay their bills is simply not acceptable. 10 Solutions for Smarter Futures is developed as a solution-focused response to the harsh cuts aimed at lone parents in Budget 2012. They are changes that will benefit everyone, not just those on low incomes, as citizens would be happier and healthier and communities would flourish in a more equal society.

1. We asked you to email your local TDs to call on them to work towards the immediate implementation of 10 Solutions for Smarter Futures. Almost 1,000 emails were sent.

2. And we asked you to spread the word by sharing the event on Facebook (OneFamilyIreland) and on Twitter  with #10Solutions (@1FamilyIreland). You did it and it made a difference in helping to raise awareness nationally and internationally.

Read all 10 Solutions here. To find out more, email us: solut10ns@onefamily.ie. 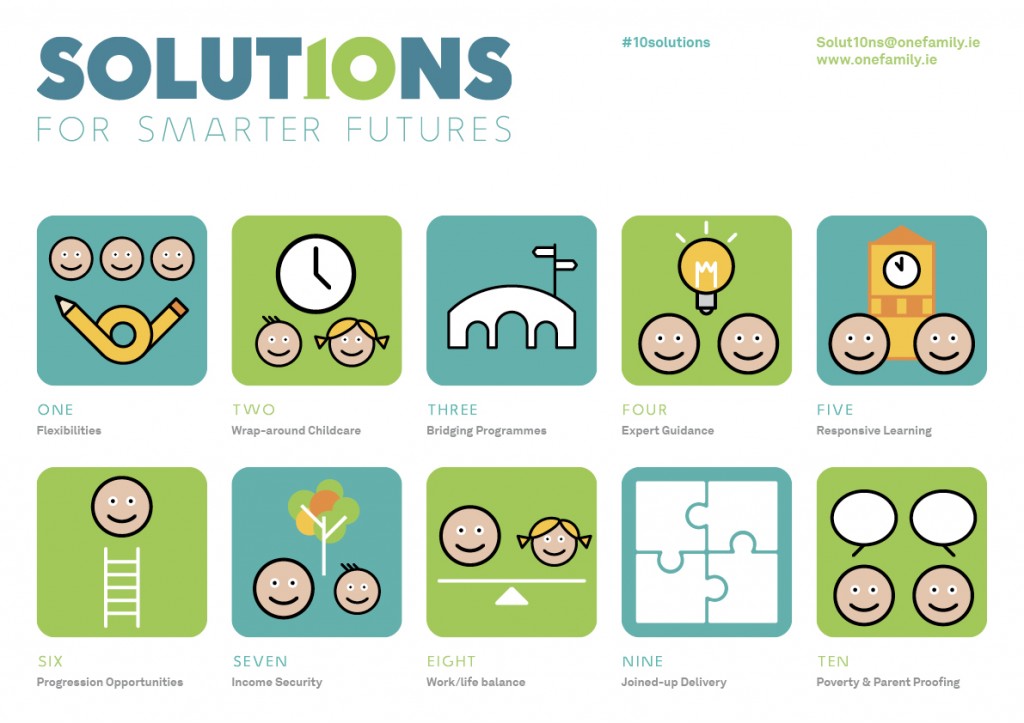