One Family has been working and campaigning on behalf of one-parent families since 1972. We work from a family-centered, human rights based approach. It has always been important to us that besides delivering vital services directly to families we also campaign and advocate for better lives for one-parent families. In all we do, we are solution-focused.

We welcome your views and comments on any topics affecting one-parent families and families in transition to policy@onefamily.ie. Read more about our current campaign below and find out how you can take action to support it. 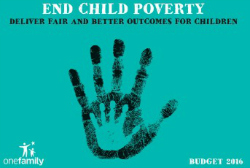 You can also read our Budget 2016 Submission here.

The current reform of the One Parent Family Payment (OFP) is failing our families. This means that Ireland’s most vulnerable parents and children will experience even greater poverty.

This reform is being phased in with the stated aim of enabling lone parents in receipt of the OFP to move from social welfare into education and employment. To date (at 31 May 2015) almost 15,000 parents have been moved from OFP when their youngest child reached the age of at least 7 years old; with almost another 40,000 parents scheduled to be transitioned to other payments – primarily the newly introduced Job Seeker’s Transitional Allowance (JSTA) or Job Seeker’s Allowance (JSA) – in July 2015. Currently, 65,000 people are in receipt of the One Parent Family Payment. However, those who are being hit hardest are those already in part-time employment and many are being forced to give up their jobs. It is incomprehensible how a system of reform purported to enable people parenting alone to return to employment or education is most adversely affecting those who are already in the process of doing so.

One Family demands an immediate pause, review and reversal of this current reform.

One Family has been working to coordinate meetings with individual politicians on a one-to-one basis to explain why the reform is failing and to gather support for our call to pause, review, reverse; and presented to Government Committees and at seminars across the country and in Europe. We have worked to raise awareness in the media of the impacts of this current reform. We have also gathered examples from parents of their experiences of the reform process, particulary of their experiences in their local offices, and provided these to the Department of Social Protection.

Why Reform of the OFP is Not Working and Our Solutions

On 5 May, we emailed a document to TDs, Senators and senior officials of the Department of Social Protection which outlines our analysis of why this reform is not working and our solutions.

Theresa, Emer and Sharon are three parents who have been transitioned from OFP to JST in recent months. Each is doing what this process of reform purports to enable people parenting alone and in receipt of a Social Welfare payment to do: work part-time and improve their family’s outcomes. Yet the impact of this reform for each has been a shocking income reduction on already very tight budgets. Vulnerable families are being pushed further into poverty.

On 26 March and again on 19 May 2015, we emailed a document highlighting the experiences of parents being moved from the OFP in their local Social Welfare/INTREO offices to officials in the Department of Social Protection. In their own words, parents overwhelmingly voice fear, anger and frustration at their engagement in a process which the majority have found to be very stressful, uninformative and unsupportive.

In March this year, we presented the working paper Minimum Income, Childcare, and One-Parent Families in Ireland.

Share this page on social media (share buttons are below) with the hashtags #StopOFPReform and #EndChildPoverty so that everyone can know the facts.

Send the link to TDs and Senators on Twitter too with the hashtags #StopOFPReform and #EndChildPoverty.

Contact us if you are interested in sharing your experience of how this reform is affecting your family, either through possible media interviews or anonymously as a case study.

A selection of recent media coverage and links to some of the press releases issued by One Family in relation to the reform are included below. If you are interested in sharing your story, please email us.

4 March 2015 | Cuts to Carer’s Allowance for Lone Parents Reversed by Tánaiste – But what about working lone parents?

27 January 2015 | “The best way out of poverty is a job,” says Joan Burton. “Where’s the education and childcare for lone parents for sustainable jobs?”asks One Family.