Government has hindered not helped

(Dublin, Tuesday 10 December 2013) One Family, Ireland’s leading organisation for one-parent families, campaigned for 10 Solutions. No Cuts. in the lead up to Budget 2014. These ten solutions are practical and economic measures that would greatly improve the quality of the lives of the adults and children of one-parent families in Ireland today. The campaign, a response to the harsh cuts of Budget 2012 that impacted disastrously on so many lone parents, was strongly supported by members of the public with hundreds of emails sent to TDs around the country.

So has Budget 2014 helped Ireland’s poorest families and children, and enabled lone parents to get back to work? One Family analysed the success or failure of Government to achieve each of its proposed 10 Solutions for Smarter Futures and awarded a score to each. The ‘Report Card’ below shows some small improvements but a very disappointing overall assessment with greater effort needed in most areas.

Karen Kiernan, CEO of One Family, states: “Following the dire cuts unleashed on one-parent families in Budget 2012, One Family has been providing solutions to government on how to help  meet  its own policy objectives of getting lone parents into sustainable employment.  Government has followed some of what we have advised but it has a long way to go. There is deep and continuing dissatisfaction with the existing social assistance system from all quarters: community groups, business, politicians, the people who run the system and customers.”

Stuart Duffin, One Family’s Director of Policy, comments: “Budget 2014 needed to deliver opportunities and chances for all our families and in particular those parenting alone. As Enda Kenny says, ‘Work must pay’; but more importantly investment is needed to help families out of persistent poverty. Investment in resources and services will enable that move. If  ‘work is to pay’ we need to look at how an efficient tax system can enable change; for example, Child and After School tax credits, moving FIS to being paid through the pay packet and on a sliding scale.”

Mr Duffin continues: “Budget 2014, despite being an opportunity to reward achievement, has in many ways – such as the ongoing slashing of the earning disregards and the abolition of the in-work One-Parent Family Tax Credit for both caring parents – nurtured perverse economic incentives to engage in the labour market.  The integration of social and economic instruments should be a whole of government effort, to prevent unintended consequences.” 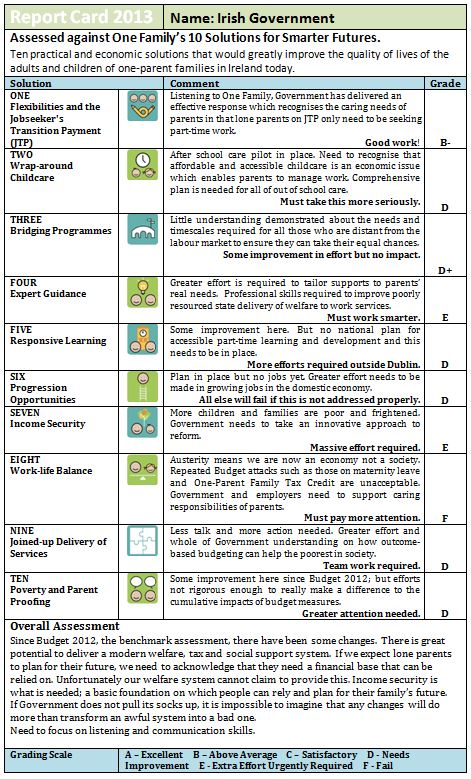