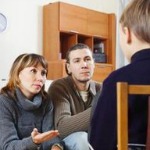 Dean contacted One Family because he wished to share his personal experience of when his parents separated. In the first of a series, this is Dean’s story in his own words. He is now 16 years old.

When people tend to bring up living in a house with separating parents, it always seems to be a rather saddening story; a tale of sorrow and anguish. Sometimes this can be true but for the majority of cases, mine included, it doesn’t live up to the tumultuous stories of the past.

Perhaps it was because the whole situation began when I was aged 12, but I don’t feel that the separation was detrimental. Of course there were times where it was difficult; where I didn’t understand what, when or why, but this just wasn’t common. I don’t really remember any specific events, no categorically haunting memories.

One of the main things I see children struggle with when they’re in this situation is picking a side. What we don’t realise is we shouldn’t have to pick a side, and we shouldn’t pick a side.

A lot of the time there are many things omitted when we receive the news of the separation from our parents. Whether this is done in an attempt to protect us, or it is a flawed system to save the opinions of both parents I don’t know, but it seems to be a common practice. One of the most difficult things for a parent to do is to admit to their children that they weren’t right, or things didn’t work out the way they’d hoped.

As people, we have a tendency to demonise and hate change, subsequently hating the thing or person who has brought it. Throughout my experience I found I likened the separation to things on a smaller scale, such as equating it to a fight between friends where a lot of the time you only hear one side of the story leaving more questions than answers, but in the end, it always is resolved. Call it a coping mechanism, a means to understand – whatever you wish – but it made things simpler for me, and that’s what I wanted. It truly is the complexity of things that leaves us bewildered, that leaves that feeling of betrayal of trust or loyalty in our stomach.

10 Ways to Understanding How Your Child May Feel During Separation

10 Ways to Travel On Public Transport With Young Children

In His Own Words | Dean’s Story – When My Parents Separated, Part 2
Scroll to top